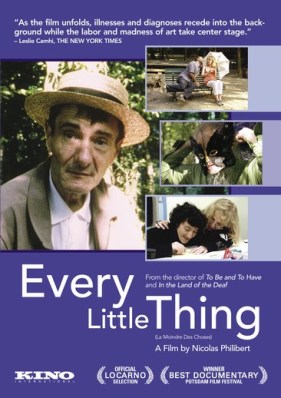 In Every Little Thing, famed documentarian Nicolas Philibert (To Be and To Have) turns his attention to the La Borde Psychiatric Clinic, a mental institution whose patients and staff stage theatrical performances every summer. Focusing on the 1995 production of Polish modernist Witold Gombrowicz's parodic play, Operetta, Philibert's fascinating film reveals the porous boundary between sanity and madness.

At La Borde, the patients walk freely on the grounds, interacting with each other and working various jobs. The staff do not wear uniforms, and Philibert refuses to identify them, making it difficult to distinguish between the two groups. With a masterfully understated approach, he forces us to observe behavior without prejudgment. When rehearsals and preparations for Operetta begin, Philibert's portrayal of human behavior becomes even more complicated. As the inmates don costumes and recite dialogue from the wildly surreal play, are they being themselves, or is it for theatrical effect? The camera observes patients getting into character, then watches as staff members shift between roles as participants in the play and as figures of authority. Slowly, the artificiality of social life and the ways in which performance is a part of all human interaction begin to come to the surface.

Philibert's unobtrusive observations accumulate into a powerful argument for La Borde's non-judgmental institutional philosophy, and force us to re-examine conventional assumptions about what is normal and what is not.

"As the film unfolds, illnesses and diagnoses recede into the background while the labor and madness of art take center stage." - Leslie Camhi, THE NEW YORK TIMES