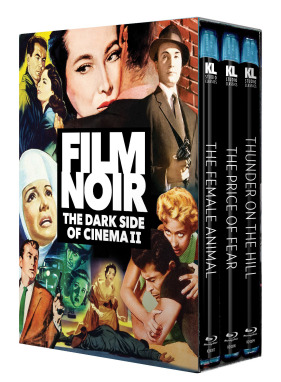 Film Noir: The Dark Side Of Cinema II [Thunder On The Hill / The Price Of Fear / The Female Animal] (Blu-ray)

This collection feature three classic noir films from the 1950s. Thunder on the Hill (1951) – From Douglas Sirk, the renowned director of All I Desire, Magnificent Obsession, There’s Always Tomorrow, Written on the Wind, Battle Hymn and The Tarnished Angels, comes this classic film noir starring screen legend Claudette Colbert (Sign of the Cross). A nun (Colbert) races against time to prove the innocence of a convicted murderess (Ann Blyth, Mildred Pierce) who is being escorted to prison for a date with the gallows. Thunder on the Hill is a moody mystery that serves up many twists and features an intriguing tour-de-force performance by Colbert and fast-paced direction by Sirk. The film is enriched by Hans J. Salter’s (Naked Alibi) stirring score, luminous black-and-white cinematography by the great William H. Daniels (Night Passage) and a first-rate supporting cast that includes Robert Douglas (The Fountainhead), Anne Crawford (Caravan), Philip Friend (Buccaneer’s Girl), Gladys Cooper (Now, Voyager) and Michael Pate (The Maze). THE PRICE OF FEAR (1956) – Hour by hour, the net of TERROR tightens! Elegant, exotic beauty Merle Oberon (The Lodger) plays against type in the unpredictable film noir The Price of Fear. A woman guilty of a hit-and-run accident frames another person for the crime, but soon is implicated in a far worse situation with a gangster who uses blackmail to lure her into a murder plot. Wonderfully directed by Abner Biberman (Gun for a Coward) and beautifully shot by Irving Glassberg (The Tarnished Angels), with a stellar cast that features Lex Barker (The Girl in Black Stockings), Charles Drake (Female on the Beach), Gia Scala (The Guns of Navarone) and Warren Stevens (Deadline - U.S.A.). The Price of Fear is a classic thriller that will leave you guessing until the shocking climax. THE FEMALE ANIMAL (1958) – It is said that when a woman fights for a man, she is like an ANIMAL! Never come between a woman and her prey in the wickedly entertaining film noir The Female Animal! Hollywood star Vanessa Windsor (Hedy Lamarr, The Strange Woman) is saved from a terrible on-set accident by handsome studio extra Chris Farley (George Nader, House of 1000 Dolls). In appreciation of his skills and good looks, she sets him up as the “caretaker” of her beach house. When Vanessa’s sultry daughter (Jane Powell, Royal Wedding) meets Chris, the claws come out as both ladies try to stake out his affections in this campy and lusty battle for love. Stylishly directed by Harry Keller (The Unguarded Moment) and beautifully shot by the great Russell Metty (A Touch of Evil), with a strong supporting cast that includes Jan Sterling (Female on the Beach), Jerry Paris (Marty), James Gleason (Here Comes Mr. Jordan) and Gregg Palmer (Magnificent Obsession).

Theatrical Trailers for All Three Films