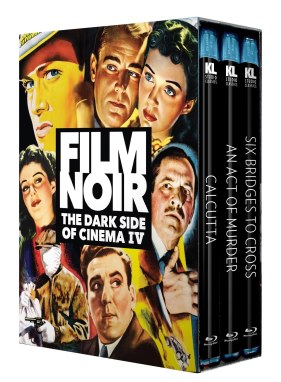 Film Noir: The Dark Side of Cinema IV [Calcutta / An Act of Murder / Six Bridges to Cross] (Blu-ray)

This collection features three film noir classics. CALCUTTA (1946) – From John Farrow, the acclaimed director of Wake Island, The Big Clock, Alias Nick Beal, His Kind of Woman, Hondo and Back from Eternity, comes this classic film noir starring screen legend Alan Ladd (This Gun for Hire, The Blue Dahlia, Shane) with Gail Russell (The Uninvited, Angel and the Badman) and William Bendix (Lifeboat, The Glass Key). Neale (Ladd) and Pedro (Bendix) fly cargo between Chungking and Calcutta. When their friend and fellow pilot Bill is murdered, Neale vows to play judge and jury and bring the criminals to justice himself. Along the way, he meets Bill’s fiancée Virginia (Russell) and becomes suspicious of a deeper plot while also falling for her charms. Beautifully shot by John F. Seitz (The Lost Weekend, Double Indemnity) and co-starring June Duprez (And Then There Were None), this heart-pounding thriller simmers with postwar intrigue. AN ACT OF MURDER (1948) – From Michael Gordon, the acclaimed director of The Web, The Lady Gambles, Woman in Hiding, Cyrano de Bergerac, Pillow Talk and Portrait in Black, comes this classic film noir starring screen legend Fredric March (Death Takes a Holiday, Inherit the Wind) as a man faced with an impossible predicament. Calvin Cooke (March), a no-nonsense judge in a small Pennsylvania town, finds his thoughts turning to end the life of his beloved wife Cathy (Florence Eldridge, The Story of Temple Drake) when he learns that she has an incurable disease and is suffering from unbearable pain. He decides to move forward with his plan and then surrenders himself to the police. Defended by a brilliant attorney (Edmond O’Brien, The Hitch-Hiker), Cooke goes on trial for his life in a case that will decide if he’s legally guilty of murder or morally innocent of killing his wife. This controversial thriller was written by Michael Blankfort (The Dark Past) and Robert Thoeren (The Prowler), based on a book by Ernst Lothar (The Clairvoyant). SIX BRIDGES TO CROSS (1955) – From Joseph Pevney, the outstanding director of Foxfire, Female on the Beach, The Midnight Story, Man of a Thousand Faces and The Night of the Grizzly, comes this classic film noir starring screen great Tony Curtis (The Vikings, Trapeze) with George Nader (The Female Animal) and Julie Adams (Bend of the River). For decades, policeman Edward Gallagher (Nader) has tried to steer his lifelong friend and charming thief Jerry Florea (Curtis) from his life of crime. As Jerry graduates from two-bit hood to criminal mastermind, he must choose between the chance at redemption offered by his friend, or the irresistible allure of the crime of the century. Gorgeously shot by legendary cinematographer William H. Daniels (Thunder on the Hill) and co-starring Sal Mineo (Rebel Without a Cause) and Jay C. Flippen (Night Passage), Six Bridges to Cross is a thrilling crime drama inspired by the infamous Great Brink’s Robbery of 1950.