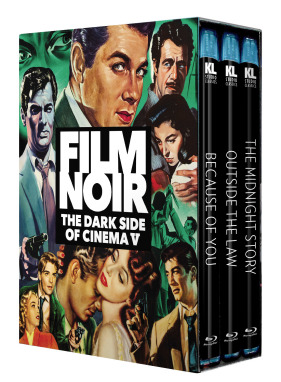 Film Noir: The Dark Side of Cinema V [Because of You / Outside the Law / The Midnight Story] (Blu-ray)

This collection features three film noir classics. BECAUSE OF YOU (1952) – Loretta Young (The Stranger, The Farmer’s Daughter) and Jeff Chandler (Red Ball Express, Man in the Shadow) star in the noir romance Because of You. Blonde bombshell Christine Carroll (Young) finds out too late that her fiancé Mike Monroe (Alex Nicol, The Sleeping City) is a gangster—and she’s his unwitting accessory. Emerging from prison with dark hair and an interest in nursing, she becomes a nurse’s aide in a war hospital and soon marries a battle-fatigued patient, Steve Kimberly (Chandler). The happy couple have a daughter, Kim, but Christine’s secret past threatens to tear her family apart when Mike reappears, forcing Christine to help him escape across the Mexican border. Joseph Pevney, the director of Six Bridges to Cross and Female on the Beach, helmed this saga of love and sacrifice, shot by the great cinematographer Russell Metty (Touch of Evil). The title song was Tony Bennett’s first number-one hit and became one of his many signature songs. OUTSIDE THE LAW (1956) – Ray Danton (The Night Runner), Leigh Snowden (The Square Jungle) and Grant Williams (The Incredible Shrinking Man) star in the riveting film noir Outside the Law. Ex-con Johnny Salvo (Danton) is given the chance to redeem himself, and revenge the murder of an old Army buddy, by going undercover and helping the authorities break up a ring of international counterfeiters who will stop at nothing, including murder, to protect their operation. But first, Johnny must earn the respect of his Treasury-man father (Onslow Stevens, O.S.S.) and the trust of his buddy’s widow (Snowden). Prolific filmmaker Jack Arnold, the director of It Came from Outer Space, Creature from the Black Lagoon, Man in the Shadow, No Name on the Bullet and The Mouse That Roared, helmed this action-packed crime drama that features cinematography by noir specialist Irving Glassberg (Larceny, The Price of Fear). THE MIDNIGHT STORY (1957) – Screen great Tony Curtis (The Vikings, The Great Impostor) gives a powerful performance in the superb ’50s film noir The Midnight Story. When beloved priest Father Tomasino is murdered in a San Francisco alleyway, traffic cop Joe Martini (Curtis) vows to catch the killer. Ordered off the case by homicide detective Kilrain (Ted de Corsia, The Killing), Martini turns in his badge and investigates alone. He follows a hunch that Italian restaurant owner Sylvio (Gilbert Roland, Thunder Bay) could be involved and decides to hide his previous life as a cop in order to become friendly with his suspect’s family. But as Martini starts to unravel the truth behind Father Tomasino’s murder, he falls in love with the suspect’s cousin (Marisa Pavan, The Rose Tattoo), and his world is torn apart by old and new loyalties. Joseph Pevney, the director of The Strange Door and Foxfire, helmed this compelling psychological crime drama that boasts gorgeous CinemaScope cinematography by the great Russell Metty (Spartacus).

NEW Audio Commentary for THE MIDNIGHT STORY by Professor and Film Scholar Jason A. Ney

Theatrical Trailers for All Three Features