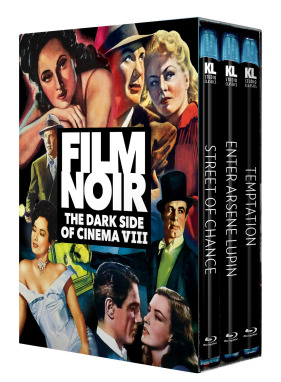 This collection features three film Noir classics. STREET OF CHANCE (1942) – From the novel The Black Curtain by the great Cornell Woolrich (Rear Window) comes this classic film noir about an amnesiac who uncovers an ugly truth. Burgess Meredith (Rocky) is Frank Thompson, who awakens in the middle of the street with nary a clue of where he is, how he got there, or why his cigarette case and hat both have the letters “D.N.” on them. Frank tries to piece together his old life while a mysterious stranger (Claire Trevor, Key Largo) seems more interested in probing his past than his wife Virginia (Louise Platt, Stagecoach). Then there’s the matter of the murder that Frank cannot remember committing. This suspense-soaked gem, with its pulpy plot and brilliant cinematography by Theodor Sparkuhl (Among the Living), established a number of conventions that helped define the noir genre. Directed by Jack Hively (The Saint’s Double Trouble). ENTER ARSÈNE LUPIN (1944) – The charming French thief Arsène Lupin (Charles Korvin, Temptation) steals a priceless emerald from the beautiful English heiress Stacie Kanares (Ella Raines, The Web) while en route to Paris on the Orient Express. However, he becomes so infatuated with Stacie that he reroutes himself to Great Britain in order to return the jewel. Meanwhile, her cousin Bessie (Gale Sondergaard, The Spider Woman Strikes Back) schemes to murder Stacie in order to claim her inheritance. Lupin is determined to intervene to save Stacie’s life, but doing so puts him at risk of being captured by the dogged cop Ganimard (J. Carrol Naish, Beau Geste). The most lovable rogue in mystery fiction leaps to the screen in this thrilling film noir directed by action-adventure ace Ford Beebe (Buck Rogers, Flash Gordon Conquers the Universe). TEMPTATION (1946) – In this Victorian-era film noir, the mesmerizing Merle Oberon (The Lodger) is Ruby, the new wife of wealthy archaeologist Nigel (George Brent, The Spiral Staircase). Unbeknownst to her husband, Ruby has had quite a checkered past, involving several divorces and extramarital affairs. While Nigel is out digging up an ancient mummy, Ruby takes up with Baroudi (Charles Korvin, Enter Arsène Lupin), a slick but impoverished Egyptian opportunist. When Baroudi threatens to leave Ruby unless she puts her husband out of the way, she plots to poison the unwitting Nigel, setting the stage for a spectacular revenge-and-retribution finale. Paul Lukas (The Kiss Before the Mirror) also stars in this electrifying melodrama from director Irving Pichel (O.S.S.), based on the book Bella Donna by Robert Hichens (The Paradine Case).

NEW Audio Commentary for STREET OF CHANCE by Professor and Film Scholar Jason A. Ney