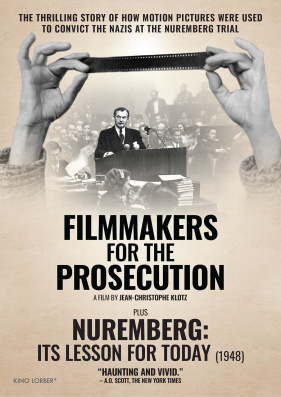 Filmmakers for the Prosecution / Nuremberg: Its Lesson for Today (DVD)

Available: May 2nd 2023. Pre-orders are generally sent several says in advance of street date. Order may not be split.

Adapted from Sandra Schulberg’s monograph, Filmmakers for the Prosecution retraces the hunt for film evidence that could convict the Nazis at the Nuremberg Trial. The searchers were two sons of Hollywood – brothers Budd and Stuart Schulberg – serving under the command of OSS film chief John Ford. The motion pictures they presented in the courtroom became part of the official record and shape our understanding of the Holocaust to this day. Seventy-five years after the trial, French journalist and filmmaker Jean-Christophe Klotz returns to the German salt mines where films lay burning, uncovers never-before-seen footage, and interviews key figures to unravel why the resulting film about the trial – Nuremberg: Its Lesson for Today by Stuart Schulberg – was intentionally buried by the U.S. Department of War. Klotz’s riveting film also fills in the gaps of how these groundbreaking materials were sourced, and poses still-pertinent questions about documentarians’ obligations to posterity. Also included on this disc is one of the greatest courtroom dramas in history, Nuremberg: Its Lesson for Today (1948). It shows how the international prosecutors built their case against the top Nazi war criminals using the Nazis’ own films and records. The trial established the “Nuremberg principles,” laying the foundation for all subsequent trials for crimes against the peace, war crimes, and crimes against humanity.

The Making of Nuremberg: Its Lesson For Today booklet [only accessible via DVD-ROM]