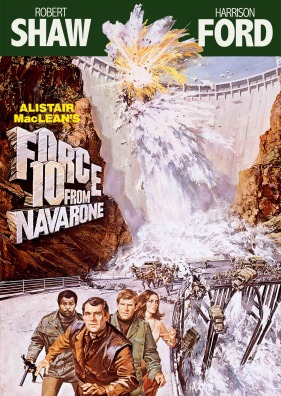 From Guy Hamilton, the acclaimed director of The Devil’s Disciple, Goldfinger, Funeral in Berlin, Live and Let Die and Evil Under the Sun, and Alistair MacLean, the legendary writer of The Secret Ways, The Satan Bug, Ice Station Zebra, Where Eagles Dare and When Eight Bells Toll, comes this action-packed sequel to the classic WWII adventure The Guns of Navarone. Screen legends Robert Shaw (The Taking of Pelham One Two Three, Jaws) and Harrison Ford (The Fugitive, Witness) star as fearless commandos on a deadly mission in the darkest days of World War II. Hitler’s armies are storming through Europe, annihilating all opposition in their path, but U.S. Colonel Barnsby (Ford) plots to strike a crippling blow to the brutal Nazi forces. To succeed, he’ll need the help of the most skilled and lethal soldiers in the world: the squad led by Captain Mallory (Shaw) and explosives specialist Corporal Miller (Edward Fox, The Day of the Jackal), fresh from its triumphant mission at Navarone. Carl Weathers (Rocky), Barbara Bach (The Spy Who Loved Me), Franco Nero (The Mercenary), Richard Kiel (Moonraker) and Alan Badel (Arabesque) co-star in this large-scale action saga with remarkable special effects and stunts. Adapted screenplay by Robin Chapman and adapted screen story by award-winning writer/producer/director Carl Foreman (The Bridge on the River Kwai, The Victors).