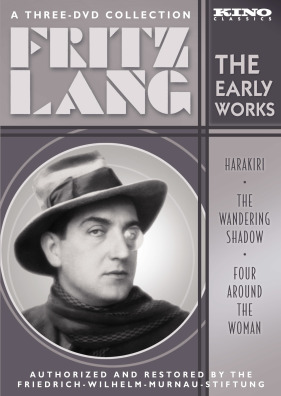 Before he gained worldwide renown for such films as DIE NIBELUNGEN, METROPOLIS, and M, Fritz Lang crafted a series of feature films that embody many of the thematic and stylistic trademarks that would come to define his work. Virtually unseen in the United States until this release, the three films in this collection were mastered from 35mm elements preserved by the F.W. Murnau Foundation, in association with numerous international archives.

An adaptation of Madame Butterfly, the tragic romance HARAKIRI indulged Lang's fascination with Asian culture and Orientalist design. Filmed on the outskirts of Berlin, Lang strived for authenticity, and obtained sets and costumes from the Hamburg Anthropological Museum.

Rich in symbolic imagery and striking location photography, THE WANDERING SHADOW was the first collaboration of Lang and Thea von Harbou. It follows a woman who, in the wake of a sex scandal, seeks solitude in the Bavarian Alps. There, she is continually haunted by her past, but soon stumbles upon the one thing she never expected to find: the chance of redemption. Anticipating such films as DR. MABUSE: THE GAMBLER and SPIES, FOUR AROUND THE WOMAN involves a society woman who must navigate through a complex web of criminal and emotional intrigues.

All films 1.33:1
Music by Aljoscha Zimmermann