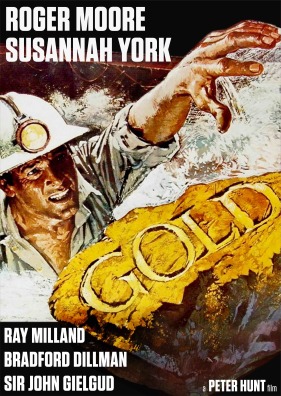 Roger Moore (Live and Let Die, Street People) and Susannah York (The Killing of Sister George) star in this explosive 1974 international conspiracy thriller, set in the South African goldfields and directed by Peter Hunt (On Her Majesty’s Secret Service, Death Hunt). A ruthless global cabal of financial investors plans to manipulate the price of gold on the world market – by sabotaging one of South Africa’s top gold mines and flooding it with millions of gallons of water. All they need is someone to take the blame. Manager Rod Slater (Moore) seems the perfect choice. He’s brash, rough and impulsive – just the sort of man to make a fatal mistake. As Slater embarks on an affair with Terry (York), the heiress granddaughter of mine owner Hurry Hirschfeld (Ray Milland, Panic in Year Zero!), the conspiracy tightens all around him and thousands of lives hang by a thread... Based on a best-selling novel by Wilbur Smith (Dark of the Sun, Shout at the Devil) and filmed entirely on location in South Africa, Gold is an unforgettable thriller with a breathtaking climax and a fantastic cast which also includes John Gielgud (The Whistle Blower) and Bradford Dillman (Compulsion).