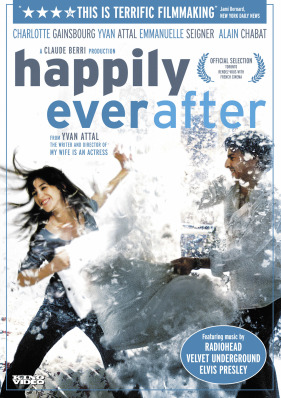 Happily Ever After (DVD)

Writer-director Yvan Attal (My Wife is an Actress) takes a "funny, observant, evanescent approach to the mysteries of human desire" (Jami Bernard, NY DAILY NEWS) in Happily Ever After, a bittersweet comedy about the battle of the married sexes. Starring Attal and real-life amour Charlotte Gainsbourg (21 Grams), Happily Ever After uncovers a web of marital deceit and sexual combustion connecting a handful of Parisian friends, spouses and lovers.

Though to all appearances happily married parents, Vincent and Gabrielle (Attal and Gainsbourg) both harbor secret doubts about their monogamy. Despairing of the cynicism of his hen-pecked married co-worker George (Alain Chabat), and envious of the joie de vivre of his swinging single friend Fred (Alain Cohen), Vincent weighs the risks involved in both keeping himself satisfied and his marriage intact. Sensitive but independent Gabrielle, in turn, feels helpless over her partner's increasing evasiveness and is drawn in to her own burgeoning fantasy life. But when she makes a surprising and powerful connection with a handsome stranger in a record store ("Yes... that's Johnny Depp!" - Paul Sherman, Boston Herald), Gabrielle stops speculating about Vincent's loyalty and begins to consider an affair of her own.

"Happily Ever After has it all...It's French. It's sexy. It's got a killer soundtrack [and] even a cameo appearance by the great, wondrous Johnny Depp." Â­ Michael O'Sullivan, The Washington Post