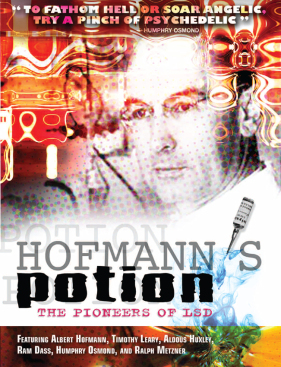 Long before Timothy Leary urged a generation to “tune in, turn on and drop out,” lysergic acid diethylamide (or LSD) was being used by researchers committed to understanding the workings of the human mind. Discovered in 1943 by Swiss chemist Albert Hofmann, LSD was hailed as a powerful tool for the treatment of alcoholism and drug addiction and to provide a window into schizophrenia and other mental illnesses. Much of that pioneering research was done by the team of Humphry Osmond, Abram Hoffer and Duncan Blewett, all working in Saskatchewan.

While researchers were establishing the medical benefits of LSD, others—like the friend of Humphry Osmond, author Aldous Huxley—promoted the drug as a powerful tool for mental exploration and self-understanding. At Harvard, Timothy Leary, Ralph Metzner and Ram Dass became popular heroes after the university cancelled their research into psychedelics.

With thoughtful interviews, beautiful music and stunning cinematography, HOFMANN'S POTION is an invitation to look at LSD with a more open, compassionate mind.