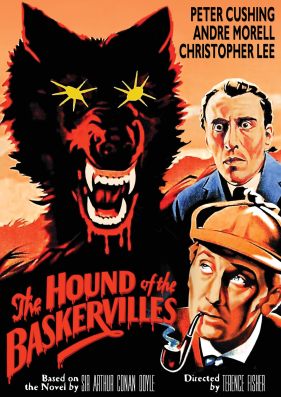 Hound of the Baskervilles (DVD)

Mastered in HD! Peter Cushing (The Skull) is a splendid Sherlock Holmes and Andre Morell (TV’s Quatermass and the Pit) is the perfect Dr. Watson in this terror-filled mystery classic co-starring horror legend Christopher Lee (House of the Long Shadows). With its compelling acting and spooky cinematography, this top-notch murder-mystery will keep you guessing and gasping until the final frame. A fiendish evil lurks beneath the mist-shrouded cliffs of England's fabled moors. In the form of a hellish hound, it feeds upon the trembling flesh of the heirs of Baskerville Hall. But before this savage beast can sink its teeth into the newest lord of the manor, it must pit its vicious fangs against the searing intellect of the most powerful foe it has ever encountered - the incomparable Sherlock Holmes. Hammer legend Terence Fisher (The Man Who Could Cheat Death) directed this masterpiece in suspense and horror, which was called “The Best Sherlock Holmes Film Ever Made!” by Time Out Film Guide.