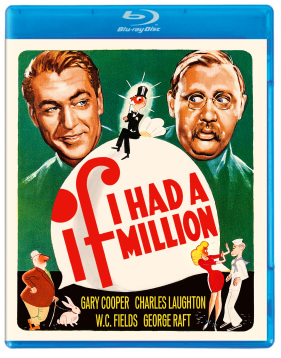 If I Had a Million (Blu-ray)

To prevent his inheritance from going to his greedy family, a dying steel tycoon (Richard Bennett) chooses eight random strangers and gives them each one million bucks. Among those chosen are an entertainer (W.C. Fields) who uses the money to clear bad drivers from the road, a Marine (Gary Cooper) who believes the check is an April Fool’s Day prank, and an office clerk (Charles Laughton) who finally sees an opportunity to quit his job. The unexpected windfalls bring joy—or tragedy—to the recipients. The anthology film If I Had a Million rounds up a veritable who’s-who of Hollywood filmmaking luminaries (including Ernst Lubitsch, Joseph L. Mankiewicz, James Cruze, H. Bruce Humberstone, Stephen Roberts, Norman Z. McLeod, William A. Seiter and Norman Taurog) and turns them loose for a zany, star-studded Pre-Code classic that bristles with imagination and wit.