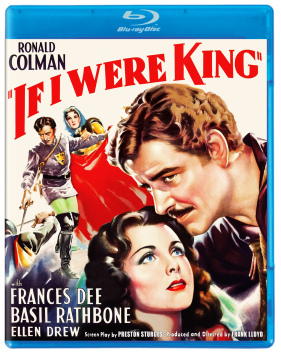 If I Were King (Blu-ray)

Available: Feb 7th 2023. Pre-orders are generally sent several says in advance of street date. Order may not be split.

Set in 15th-century Paris, a rogue poet matches wits with a crafty king and leads the Empire to victory in the spectacular romantic adventure If I Were King. Screen great Ronald Colman (Lost Horizon, A Double Life) is at his swashbuckling best as François Villon and Basil Rathbone (The Mad Doctor) gives a superb Academy Award-nominated performance for Best Supporting Actor as Louis XI, a tyrant with a besieged city on the verge of revolt. When a twist of fate makes Villon the chief constable, the king gives him a week to save the city and win the love of a beautiful princess (Frances Dee, The Crime of the Century)…or die! Deliciously wicked repartee abounds in the lavish, fast-paced excitement, which legendary writer Preston Sturges (The Great McGinty) claimed as one of his finest achievements. Directed by Frank Lloyd (Mutiny on the Bounty, The Last Command).