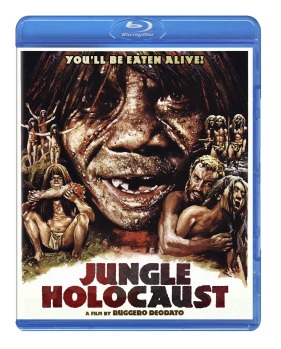 A small plane carrying Robert Harper (Massimo Foschi, The Chosen, Nine Guests for a Crime) and his friend Rolf (Ivan Rassimov, Spasmo, The Raiders of Atlantis) crash lands in an isolated development in New Guinea. After the pilot and his female companion are killed by a tribe of cannibals, the two friends on the run are separated and Robert is captured by a rival tribe, who may not be cannibals, but are cruel and primitive beyond belief. Tortured and humiliated, Robert is taken to the edge of his sanity by a series of acts so horrible that they are practically beyond human comprehension. Only the fact that one of the tribe women (Me Me Lai, Eaten Alive!, Element of Crime) sympathizes with him, gives Robert the strength to plan a desperate escape, but standing in his way back to civilization are the cannibal tribe responsible for the death of his crew members. This cannibal classic directed by Ruggero Deodato (Cannibal Holocaust, Body Count, The Barbarians) played all over America as The Last Survivor in an edited form, now watch this classic uncut from a Brand New HD master.

Includes Both the Uncut International Version and Alternate U.S. Cut