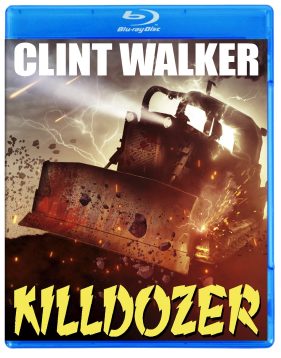 A small construction crew battles the ultimate assassin in the cult classic Killdozer. Stationed on a small island off the coast of Africa, six men find themselves terrorized when a ruthless life-form takes over a bulldozer and then sets off on a killing rampage. Despite limited fuel, the renegade machine methodically hunts down the men one by one in a full-throttle drive to death. Buckle up and hold on tight in this turbo-charged thriller! Directed by Jerry London (Shogun) and starring screen and TV legend Clint Walker (The Dirty Dozen, Cheyenne) with Robert Urich (Vega$, The Ice Pirates) and Neville Brand (Stalag 17, Kansas City Confidential). Killdozer is based on a novel by acclaimed television writer Theodore Sturgeon (Star Trek, The Twilight Zone) and features a rousing score by Gil Mellé (The Andromeda Strain, Night Gallery).