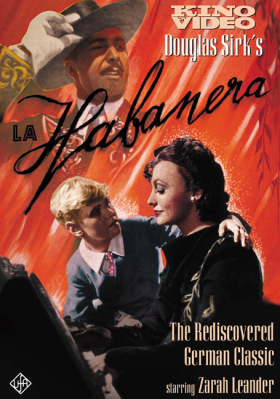 Legendary director Douglas Sirk's (Written on the Wind, Imitation of Life) La Habanera is a lushly poetic and boldly modern musical drama decades ahead of its time. Working at Germany's famed UFA Studios (Metropolis), under the very noses of the Nazi authorities that would later force him into Hollywood exile and eminence, Sirk transformed a glossy musical vehicle for UFA's "new Garbo" Zarah Leander into a dark and intimate anti-colonial melodrama.

Desperate to escape the "cold Swedish minds" of her homeland, beautiful Astree (Leander) falls under the enchanting spell of the Caribbean love serenade "La Habanera" and into the arms of Puerto Rican land baron Don Pedro de Avila (Ferdinand Marian). But ten years later, when Astree's old flame Dr. Sven Nagel (Karl Martell) arrives in Puerto Rico on an errand of mercy, all is far from heavenly. Astree is trapped in a loveless marriage to Don Pedro and the island wind that once conveyed the music of romance now carries death in the form of an outbreak of airborne tropical fever. While racing to find a cure for Astree's fever stricken son, Dr. Nagel must elude both the island authorities that would have him jailed for revealing their fatal cover-up and a psychotically jealous Don Pedro who would rather see Astree dead than reunited with her lost love.

Douglas Sirk gilds La Habanera with all the dazzling compositions, swooping camera work, and ravishing but doomed characters that distinguish his revered 1950s Universal melodramas. Coolly precise yet extravagantly emotional, La Habanera is the work of an assured cinematic poet and compelling tragedian already at the peak of his skill.