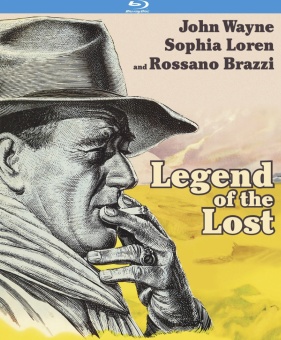 Legend of the Lost (Blu-ray)

Told against the sweeping panoramas of the Sahara desert, this star-studded epic features an exotic mix of action, suspense, and romance. Famed for its stunning location cinematography, Legend of the Lost delivers a caravan of excitement - with the screen icons John Wayne (Dakota, Brannigan) and Sophia Loren (Boy on a Dolphin, Five Miles to Midnight) leading the way. Wayne is Joe January, a hard-drinking and hard-living tour guide. When Paul Bonnard (Rossano Brazzi, South Pacific, Summertime) hires him to find his father and a legendary lost treasure, the two set out into the isolated wasteland of the North African desert. Joining them is Dita (Loren), a prostitute desperate to find a new life who comes between both men as they battle for survival... and their souls. The great Henry Hathaway (23 Paces to Baker Street, Rawhide) directed this first-class adventure with exotic backgrounds, action, mystery and intrigue.