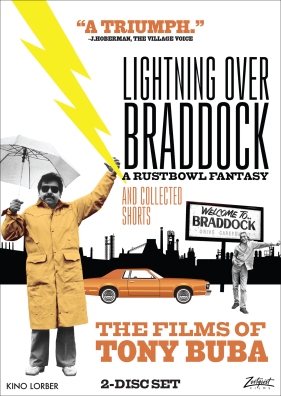 Lightning Over Braddock and Collected Shorts: The Films of Tony Buba (DVD)

For five decades Tony Buba has chronicled the industrial decline of his hometown of Braddock, Pennsylvania with bleakly disarming humor and a boldly self-reflexive style. Kino Lorber and Zeitgeist Films are proud to present a two-disc collection of his newly restored films starting with his 1970s shorts and working its way through his feature-length masterpiece Lightning Over Braddock: A Rust Bowl Fantasy (1988) and on into his essential recent work. In Lightning Over Braddock, Buba plays himself as a struggling director trying to make a feature with narcissistic conman Sal (subject of the short Sweet Sal), but never manages to leave Braddock, where factories keep closing despite the heroic efforts of local unions. With its mix of politically potent documentary portraiture and hilarious comic re-enactments, it’s an uncategorizable work of art that has had a vast, if underground, influence on the future of documentary, anticipating the work of everyone from Michael Moore to The Daily Show.