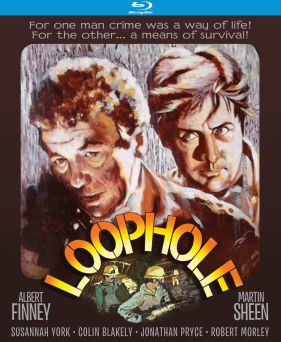 The Most Ingenious Bank Robbery Ever! Stephen Booker (Martin Sheen, Apocalypse Now) is a highly successful London architect, until an important contract falls through and his business partnership in terminated. The over-qualified Booker struggles to find a new job and out of the blue, he’s approached by Mike Daniels (Albert Finney, Murder on the Orient Express) to supervise the conversion of a city block alongside the world’s largest and most established holding bank. Booker soon discovers that the real job at hand is a planned heist of the bank’s vault that holds millions. Hard pressed for money with a huge mortgage and extravagant lifestyle, Booker agrees to join an elite team of expert criminals and carry out the ambitious band robbery. The stupendous cast also includes Susannah York (Gold), Colin Blakely (The Private Life of Sherlock Holmes), Robert Morley (Topkapi), Jonathan Pryce (Man on Fire) and James Grout (Inspector Morse). Great direction by British producer, John Quested (Philadelphia, Here I Come), the second and final film he ever directed, with a rousing score by Lalo Schifrin (Mission: Impossible, Dirty Harry) – Loophole is a suspenseful and exciting crime thriller and quite possibly one of the most ingenious heist films ever made.