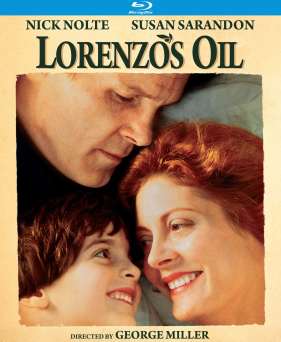 From George Miller, the acclaimed director of Mad Max, The Road Warrior, The Witches of Eastwick, Babe: Pig in the City and Mad Max: Fury Road, comes this heartbreaking drama starring screen legends Nick Nolte (Extreme Prejudice, 48 Hrs.), Susan Sarandon (Atlantic City, Dead Man Walking) and Peter Ustinov (Death on the Nile, Topkapi). For Augusto and Michaela Odone (Nolte and Sarandon), the news that their five-year-old son, Lorenzo, has a rare terminal disease is sobering; to learn there is no known cure is devastating. Despite the prognosis, they embark on an extraordinary mission of love, consulting and sometimes colliding with the world’s top doctors and scientists in the quest to save their son. Their relentless struggle tests their marriage, their beliefs and the boundaries of conventional medicine in this critically acclaimed hit. Based on a true story and beautifully shot by award-winning cinematographer John Seale (Witness, The English Patient), the unforgettable Lorenzo’s Oil was nominated for two Oscars: Best Actress (Sarandon) and Original Screenplay (Miller and Nick Enright).