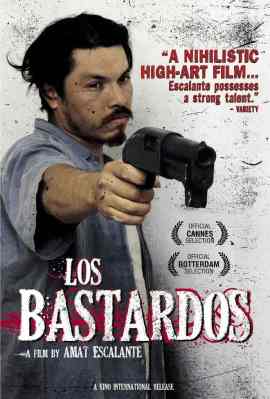 Like the rest of the day-laboring migrant workers who gather together each morning on a southwestern American strip mall sidewalk, Jesus (Jesus Moises Rodriguez) and Fausto (Rubén Sosa) struggle to get ahead in El Norte. But when a callous gringo boss strands them in the middle of a community that exploits them one minute and insults them the next, the two young men cock their sawed off shotgun and calmly take a troubled housewife hostage in her own home. "Why are you doing this?," asks Karen (Nina Zavarin), a strung- out and paranoid divorcee with little left to lose. "Por la dinero," replies Jesus. Before Los Bastardos reaches its shockingly violent climax, Jesus, Fausto, and Karen will have mapped out a contemporary North American wasteland of affectless, benumbed amorality far surpassing mere greed.

Co-produced by Carlos Reygadas (Silent Light, Battle in Heaven), Los Bastardos plumbs the depths of human brutality with the same cool cinematic certitude as the work of Michael Haneke and Bruno Dumont.