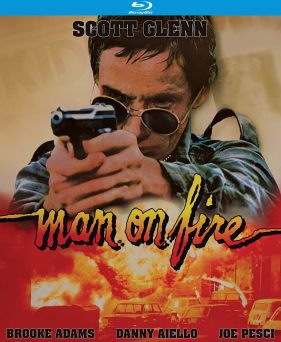 A 2K Restoration! Scott Glenn (The Challenge) is caught in a deadly game of international terrorism where money, malice and murder are the keys to survival. Present day Italy, a country plagued by the vicious savage attacks of merciless terrorists. Daily newspaper headlines cry out the latest tragedies of bombings, murders and kidnappings. Creasy (Glenn), a former CIA agent, now a broken shell of his old self and on the brink of total collapse, accepts a position of a bodyguard for the young daughter (Jade Malle) of one of the country’s wealthiest families. He reluctantly grows attached to the little girl, giving her the friendship, guidance and support her parents are unwilling to provide. But when the child is kidnapped by a group of vicious terrorists, Creasy is thrown into a ferocious world of treachery and turmoil… filled with rage, he’s transformed into a Man on Fire, fighting for her life at whatever the cost. The stellar cast includes Joe Pesci (Goodfellas), Brooke Adams (Cuba), Jonathan Pryce (Brazil), Paul Shenar (Scarface), Danny Aiello (Jacob’s Ladder) and Lou Castel (Fist in the Pocket). Man on Fire was remade in 2004, with Denzel Washington, Dakota Fanning and Christopher Walken.