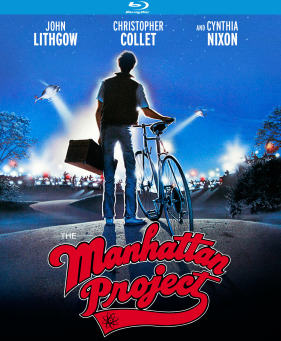 Can anyone stop this Armageddon? A high school science whiz kid builds an atomic bomb as a prank... only to trigger a horrifying race against time. The Manhattan Project is an intelligent, gripping and entertaining thriller with a satisfyingly suspenseful finale. Teenage genius Paul (Christopher Collet, Firstborn) realizes the lab of Dr. Mathewson (John Lithgow, Raising Cain, Blow Out) his mother's (Jill Eikenberry, Hide in Plain Sight) new boyfriend, isn't really developing lasersâ€¦ it's building nuclear bombs. To expose the lab's secret mission, Paul and his girlfriend Jenny (Cynthia Nixon, Sex and the City) steal some plutonium, build a bomb and enter it in a science fair. But the military learns of Paul's plans and pursues him with lethal intent. Now, as time is running out, only Dr. Mathewson can save Paul... and stop the unthinkable from occurring! Co-written and directed by Marshall Brickman, the co-writer of Woody Allen's all-time classics Sleeper, Manhattan, and Annie Hall.