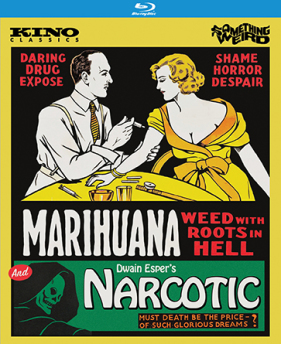 Dwain Esper was not only one of the most notorious figures of the exploitation genre (due to his ruthless business practices) he was also its greatest stylist. With an utter disregard for the laws of cinematic convention, his low-budget films verge on the avant-garde as they breathlessly wallow in every conceivable moral vice—all in the name of public education, of course. Marihuana follows the downward trajectory of a bright high school girl (Harley Woods) who dabbles in cannabis and becomes a hardened, heroin-addicted criminal, who inadvertently kidnaps her own child (whom she had given up for adoption). Inspired by a true story, Narcotic is the story of an idealistic physician (Harry Cording) whose personal journey leads him through opium dens, carnival tents, sex-crazed drug parties, skid-row brothels, and eventually the halls of madness.