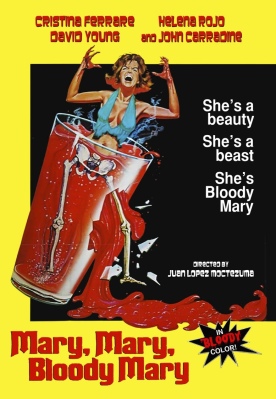 Mastered in HD! A dark and stormy night begins this modern gothic tale of evil personified in Mary (Christina Ferrare, J.W. Coop, Impossible Years), a beautiful American artist living in Mexico to more easily gratify her growing lust for blood. While her horrific appetites are fueled, her life becomes further fraught with the investigation into the grisly murders, love for handsome young American ex-patriot (David Young, Double Exposure, High Risk), and by the sudden, terrifying appearance of her like-minded father (John Carradine, The Monster Club, House of the Long Shadows), intent upon satisfying his own heinous hungers as well as killing Mary before she, too, becomes totally consumed by his legacy of compulsion. As Mary continues to cut a bloody swath across the country, investigators and her pursuing parent close in the suspense and nightmarish drama gather to a final chilling confrontation. Code Red presents the first official legitimate DVD release of this 1975 cult shocker, from Juan Lopez Moctezuma, the director of The Mansion of Madness and Alucarda!