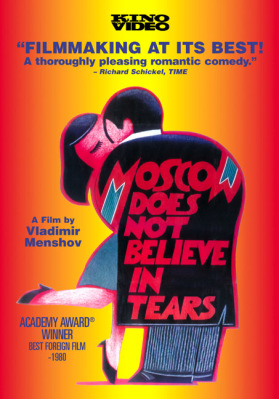 Moscow Does Not Believe In Tears (DVD)

Winner of the Academy Award for Best Foreign Language Film (edging out such formidable competitors as Kurosawa's Kagemusha, Truffaut's The Last Metro and Szabo's Confiedence), Moscow Does Not Believe In Tears is Vladimir Menshov's enchanting drama of three women struggling to establish themselves in Russia's huge and often impersonal capital city.

Liudmilla, Katerina and Antonina seem to have little in common, but are bound by a deep friendship and the shared dream that in Moscow they will somehow find happiness. Moscow Does Not Believe In Tears follows their resourceful pursuit of professional and domestic bliss in 1958, then skips forward twenty years to see just how many of their dreams have come true.

On one level Moscow Does Not Believe In Tears works as a free-spirited melodrama in the classical Hollywood tradition, yet at the same time it offers something more. Beneath its charming exterior, the film is a truthful, moving portrait of the plight of women in Russia, depicted over the span of two decades.