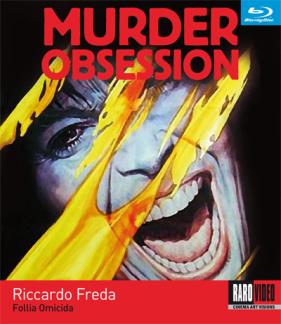 Director Riccardo Freda, known for mentoring one of Italy's master cult horror film makers, Mario Bava, brings us (for the first time available on DVD in the US), one of his sexiest giallos: Murder Obsession which tells the story of a horror film actor Michael Stanford (played by Stefano Patrizi) who, after shooting his film, visits his mother (Anita Strindberg) at their old mansion.

The only other person on the property is Oliver (played by John Richardson), the eccentric butler. Michael's girlfriend, Deborah(Silvia Dionisio), and some of their filmmaking friends join Michael at the mansion for a couple of days rest.

Michael decides to confess to his friends that he murdered his father (who was a famous orchestra conductor) during a psychotic episode when he was a child, but as a result he is immediately suspected as the murderer when his friends start getting killed.

•Interview with Claudio Simonetti (composer and founder of Goblin)