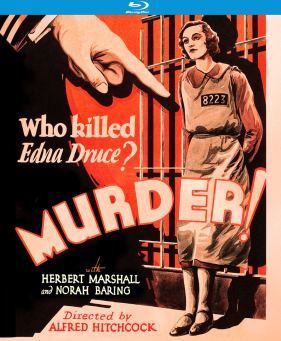 From the Master of Suspense, Alfred Hitchcock, the legendary director of Blackmail, Shadow of a Doubt, Rear Window and The Birds. Hitchcock’s third sound film was a return to the crime genre, adapted by Hitchcock and Walter Mycroft (Champagne) from the play Enter Sir John by Clemence Dane (A Bill of Divorcement) and Helen Simpson (Sabotage). Actress Diana Baring (Norah Baring, A Cottage on Dartmoor) is convicted of the murder of another actress in the same touring company. But the distinguished actor Sir John Menier (Herbert Marshall, The Letter), who served on the jury at her trial, becomes convinced of her innocence and decides to solve the case. Beautifully shot by Jack E. Cox (The Lady Vanishes). This special edition also includes Mary, the 1931 German version of the film, directed by Hitchcock and starring Alfred Abel as Sir John Menier and Olga Tschechowa as Mary Baring.