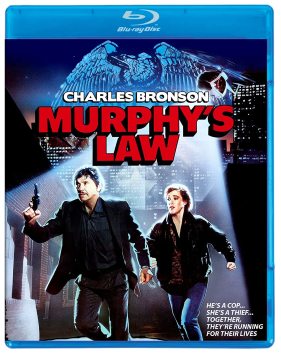 A killer on a rampage learns the hard way: “Don’t mess with Jack Murphy!” Screen legend Charles Bronson (Mr. Majestyk, Death Wish) stars in this thrilling game of hide-and-seek between a clever psychopath and a lone lawman hellbent on reaping justice. Veteran detective Jack Murphy (Bronson) is suddenly a wanted man after he’s framed for the murder of his ex-wife. Taken into custody by the very cops he works with, Murphy has no choice but to escape and hunt down the killer who set him up. But even as he pursues a false lead, Murphy is pursued by the real murderer—a psychotic woman (Carrie Snodgress, Diary of a Mad Housewife, The Fury) out for revenge against those who institutionalized her ten years earlier… including Murphy! Bronson teams up with his frequent director, the legendary J. Lee Thompson (The White Buffalo, Cabo Blanco, 10 to Midnight, The Evil That Men Do), for this tough-as-nails tale of vengeance! Co-starring Kathleen Wilhoite (Road House), Robert F. Lyons (Platoon Leader), Angel Tompkins (The Don is Dead), Richard Romanus (Mean Streets) and Lawrence Tierney (Reservoir Dogs).