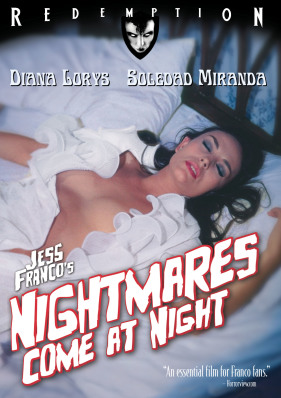 For years considered a lost Franco film (after having played at a single theatre in Belgium), NIGHTMARES COME AT NIGHT (Les cauchemars naissent la nuit) was rediscovered in 2004 and has been recognized as a key film in the evolution of Franco's cinema, which in 1970 was assuming a dreamlike logic, governed more by the director's libido than traditional horror movie structure.

Diana Lorys (The Awful Dr. Orlof ) stars as a sultry dancer who falls under the hypnotic control of the sinister blonde Cynthia (Colette Giacobine) and begins to suffer terrifying hallucinations, from which not even a gifted psychiatrist (Paul Muller) can save her. Meanwhile, a pair of jewel thieves (Soledad Miranda and Jack Taylor) hide out at a nearby house, biding their time until they can confront Cynthia for their share of a recent heist.