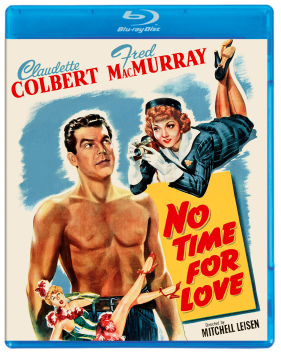 No Time for Love (Blu-ray)

One of Hollywood’s favorite screen duos of all time, Claudette Colbert (The Gilded Lily, It Happened One Night) and Fred MacMurray (The Bride Comes Home, Murder, He Says), join together in the romantic comedy No Time for Love. Sophisticated fashion photographer Katherine Grant (Colbert) is assigned to photograph the tough “sandhog” construction workers at a tunnel project site. One of the cocky, well-built workers, Jim Ryan (MacMurray), falls for the upper-class Katherine, but the picture is not pretty when he loses his job and she hires him to be her assistant. This heartwarming classic proves the old adage that opposites attract! Wonderfully directed by Mitchell Leisen (Hands Across the Table, No Man of Her Own), shot by Charles Lang (Separate Tables) and co-starring Ilka Chase (Now, Voyager), Richard Haydn (The Emperor Waltz), Paul McGrath (A Face in the Crowd) and June Havoc (Gentleman’s Agreement).