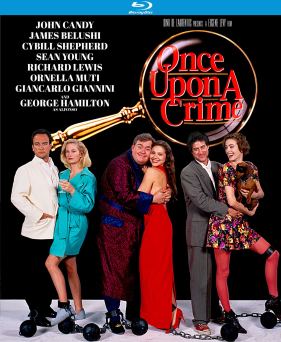 Once Upon a Crime (Blu-ray)

What do you get when you combine four bumbling American tourists, a $5000 puppy and a dead body? Inspired lunacy starring John Candy (Delirious), James Belushi (Mr. Destiny), Cybill Shepherd (Special Delivery), Sean Young (Fire Birds), Richard Lewis (The Wrong Guys), Ornella Muti (Oscar), Giancarlo Giannini (Seven Beauties), Joss Ackland (White Mischief), Elsa Martinelli (The Indian Fighter) and George Hamilton (Zorro: The Gay Blade). Lewis and Young are two down-and-out Americans attempting to return a lost dog to its Monte Carlo socialite owner for a $5000 reward. But when the owner is murdered, they become the prime suspects. But who's the real killer? The roulette loser (Candy)? The gigolo (Hamilton)? Or could it possibly be... the dog? Once Upon a Crime is the perfect film to see after a brain-taxing day – directed by SCTV comedy legend Eugene Levy.