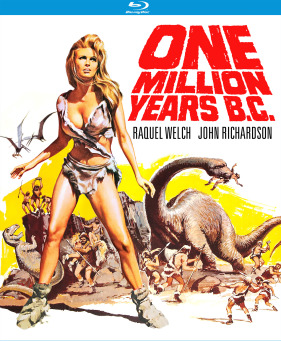 In this vivid view of prehistoric life, a man from the vicious Rock People, Tumak (John Richardson, Black Sunday) is banished from his home, but soon finds himself living among the kind, gentle Shell People. There, he falls in love with the beautiful Loana (Raquel Welch, 100 Rifles, Fuzz, Fathom), in the role that made her an international sex symbol and a major star. The two decide to strike out on their own, living by their wits in a deadly land of treacherous beasts and unknown dangers, leading to a thrilling climax by the edge of an angry volcano. The stunning primeval creatures were created by the legendary special effects wizard Ray Harryhausen (The Beast from 20,000 Fathoms). One Million Years B.C., a true science-fiction classic, was directed by Don Chaffey (Jason and the Argonauts) and featured a strong supporting cast that included Martine Beswick (Thunderball), Robert Brown (The Living Daylights), Percy Herbert (Too Late the Hero) and Yvonne Horner (Prehistoric Women). The 100-minute international cut and the 91-minute U.S. cut are both included on this Blu-ray.

In the Valley of the Dinosaurs: Interview with Star Raquel Welch

Animated Montage of Posters and Images

"Fans have a lot to be happy for with this Blu-ray release from Kino Lorber. Not only do you get both cuts of the film, but both versions arrive with exceptional A/V presentations. If only every movie could get this sort of restoration treatment collectors would be having a field day. Toss on a solid assortment of bonus features and you've got a Blu-ray set that makes 'One Million Years B.C.' well worth owning. Highly recommended. "

"The Kino a/v Blu-ray transfers work well for a grand HD presentation and the extras have immense value. Despite the film's scientific inexactitudes - I loved seeing it again after many years. Time for a Harryhausen festival! This is absolutely recommended!"

"should please most fans of the feature, bringing the special effects-laden extravaganza to HD with welcome sharpness. Details are critical here, and they're preserved to satisfaction, leading with sweaty, grimy close-ups of the tribal warriors, while Welch is equally crisp, exploring the textures of her make-up and outfit, finding all costuming appealing, showing off intricately positioned fabrics and leather."

One Million Years B.C. has been a fixture on countless Blu-ray wish lists for more than a decade now, and Kino Lorber Studio Classics has ensured that this release has been well-worth the wait. Boasting some of the most iconic animation in Ray Harryhausen's storied career, its visual spectacle is only heightened by this exceptional 4K remaster. Raquel Welch may groan at One Million Years B.C. as an embarrassment to live down, but I found the film to hold up marvelously these many decades later. Although a more extensive selection of extras would've been appreciated, I still very much enjoyed what's been offered here. Highly Recommended.