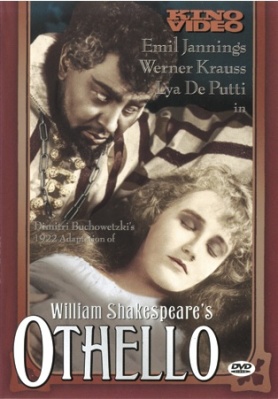 Directed by Russian expatriate Dimitri Buchowetzki and starring legendary screen actors Emil Jannings (The Last Laugh, Faust, The Blue Angel) and Werner Krauss (The Cabinet Of Dr. Caligari), this early version of William Shakespeare's Othello is a fine example of artistic and technical virtuosity of the German silent cinema.

Rather than a literal adaptation of Shakespeare's tragedy, the film is more of a dark psychological thriller in the German tradition. Cavernous chambers and stony battlements cast shadows of impending doom upon Othello (Jannings) and Desdemona (Ica von Lenkeffy) as the mephistophelian Iago (Krauss) dances about them, methodically destroying their happiness and steering them toward their bitter fate with impish delight.
Product Extras :

Four Silent Shakespearean Shorts preserved by the Library Of Congress: