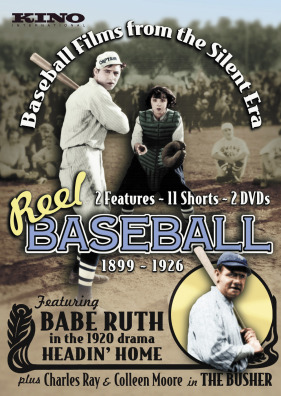 This DVD collection features a cornucopia of early - and, in many cases, extremely rare - baseball films, offering privileged peeks into early twentieth century American lifestyles and values. It includes newly remastered and scored versions of two important early baseball features: The Busher (1919), a delightful comedy-drama featuring silent cinema legends Charles Ray, Colleen Moore, and John Gilbert; and Headin' Home (1920), spotlighting a young, shockingly svelte Babe Ruth in his first motion picture starring role. Other items include Casey at the Bat or The Fate of a "Rotten" Umpire (1899), one of the first representations of baseball on celluloid; a 1922 experimental sound film featuring aging matinee idol DeWolf Hopper reciting "Casey at the Bat" Hearts and Diamonds (1914), a comedy with roly-poly screen star John Bunny; One Touch of Nature (1917), which features New York Giants Hall of Fame manager John McGraw; and Felix Saves the Day (1922), an animated short starring Felix the Cat. His Last Game (1909) and The Ball Player and the Bandit (1912) blend baseball with the American West.

So kick off your spikes, slip on your favorite baseball cap, and prepare to be transported to an earlier, more innocent age.
- Rob Edelman

I know about as much about baseball as I do about quantum physics, but I found much of the material in this two disc-set, recently released by Kino, absolutely fascinating. Cinephiles who reflexively avoid sports movies (not the most distinguished of genres) will find "Reel Baseball: 1899-1926" a thinly disguised attempt to smuggle some lesser-known early films onto the DVD market. Baseball fans will be delighted by the dramatic presence of a young, slim Babe Ruth, playing an imaginary version of himself in the 1920 feature Headin' Home, and by the great New York Giants manager John McGraw, playing himself in an excerpt from the 1917 Edison feature "One Touch of Nature.". - Dave Kehr, The New York Times

"Though the silent films in 'Reel Baseball" (Kino), a two-disk set of features and shorts made from 1899 to 1926, are of minor artistic value, they offer fascinating glimpses of the state of the game - and of the union - in that era." - THE NEW YORKER Read the full review.

To watch Kino's two discs full of fable and lore - everything from Casey to Felix the Cat, varied shorts and scattered rarities set to piano and organ - is to see how that would come to be. If you'll always have the old ball game and the old, weird America (with apologies to Greil Marcus) in your heart, you'll want to have this well-produced set in your collection. - The Austin Chronicle