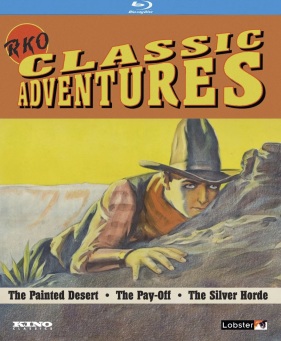 Kino Classics and Lobster Films are proud to present four newly restored action-packed films in the RKO CLASSIC ADVENTURES collection. Preserved by the Library of Congress and restored by Lobster Films, these potent two- fisted brawlers from the prolific RKO Radio Pictures studio were the types of movies that sold out theaters in the wild early days of sound film. The Painted Desert is a pistol-packing Western about feudin’ families starring Bill Boyd and Helen Twelvetrees (and featuring Clark Gablein his talkie film debut). The Pay-Off isa cool-minded gangster movie directedby (and starring!) Lowell Sherman as an honorable mobster in a dishonorable racket. The Silver Horde drops Joel McCrea into the midst of a dreaded rivalry between two fishing groups – led by Evelyn Brent on one side and Gavin Gordon on the other.