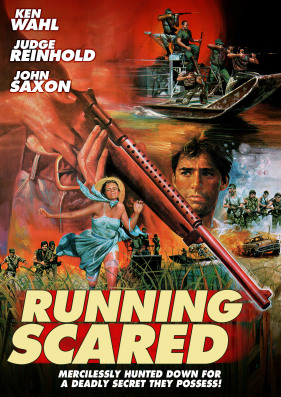 A Code Red Release! Ken Wahl (The Soldier, The Wanderers, The Taking of Beverly Hills, Wiseguy) and Judge Reinhold (Beverly Hills Cop trilogy, Fast Time at Ridgemont High, Vice Versa) star in this 1980 action film. In 1961, Chas (Wahl) and Leroy (Reinhold), two fun-loving military servicemen who had enough of the service, leave Panama as stowaways in a military cargo plane flying for the States. Leroy is not satisfied with compensation for his army days, so he smuggles with him one box of military supplies, which he plans to sell in the USA. He tries out a military camera to take photos of a military base they fly over and throws away the photos. In the states, an army cleaner finds the photos inside the plane and alerts his superiors. They think the stowaways are communist spies and the base starts a frantic search, leading to a life and death chase across the Florida Everglades. John Saxon (Moonshine County Express, Strange Shadows In An Empty Room), Bradford Dillman (Bug, The Mephisto Waltz, The Swarm), Pat Hingle (Bloody Mama, Hang ‘em High) and Annie McEnroe (The Hand) co-star!