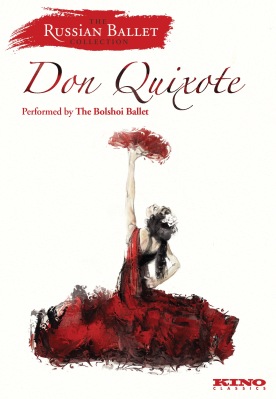 With its sunny effervescence and dazzling leading roles, Don Quixote has come to exemplify Bolshoi Ballet virtuosity. Premiered in 1896, Marius Petipa's choreography reflected his travels in Spain and his love of castanets, toreadors and Spanish bravura, loosely connected to Cervantes' classic. Don Quixote, and elderly Spanish knight, sets off with his servant Sancho Panza on a chivalrous quest. He comes across a village where the innkeeper's daughter Kitri and Basilio the barber are trying to persuade Kitri's father to let them marry. But he wants Kitri to make a better marriage to the rich but foppish Gamache. Don Quixote fantasizes that Kitri is his dream Dulcinea, a noble lady who must be rescued from this potential tragedy, and the rest of the ballet show the comic events that finally result in love winning the day amid a feast of brilliant dancing. This 1978 live performace film from the Bolshoi Theater, digitally restored and remastered to HD quality, stars Nadezha Pavlova with her husband Vyacheslav Gordeyev, dancers rarely seen in the West. Don Quixote is Vladimir Levashev, and Ludwig Minkus's bubbling music is conducted by Alexander Kopylov.