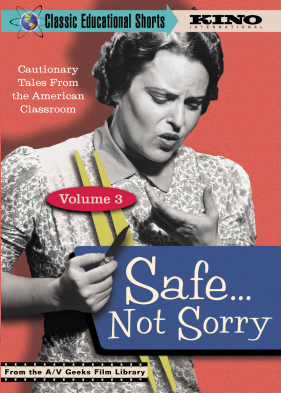 Though the era of 16mm educational cinema has come to a close, those quirky films unspooled in the mid-century American classroom continue to fascinate viewers today. And no group of titles is more popular than the safety films. Presenting scenarios that couldn’t be depicted in a textbook or described from a lectern, safety films capitalized on the drama and spectacle of death—lurking around every corner, in every pair of scissors, in every overloaded electrical cord, on every park bench where a stranger pets a puppy.

The techniques employed by the fourteen films in this collection include: slapstick comedy (Step Right Up, on ladder safety), docudrama (Our Obligation, a large-scale reenactment of a tragic schoolhouse fire), fantasy (Safety: Harm Hides at Home, which features an accident-fighting Wonder Woman knock-off named Guardiana), and animation (Lucky You, from the legendary Jam Handy studios). And no safety collection would be complete without an homage to the "King of Calamity," Sid Davis (the child-molester film Dangerous Stranger and the unintentionally sadistic Live and Learn).


Curated by Skip Elsheimer
Produced for video by Bret Wood

This collection was mastered from vintage 16mm prints circulated among schools and rescued, decades later, by collectors. The image and sound quality of these orphan films do not conform to Kino’s usual standard.