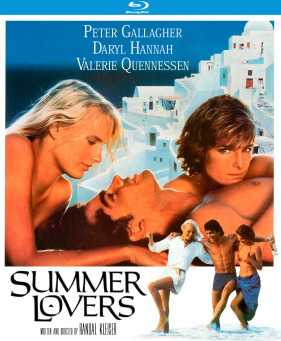 Peter Gallagher (The Idolmaker, The Underneath) and Daryl Hannah (Kill Bill: Vol. 2, Legal Eagles) ignite the screen in this scintillating story of love, lust and obsession from Randal Kleiser, the director of The Blue Lagoon and Grease. Michael (Gallagher) and his childhood sweetheart Cathy (Hannah) go to Greece to spend the summer on the isle of Santorini–where, despite his love for Cathy, he finds himself lured by Lina (Valérie Quennessen, French Postcards), a vacationing French archeologist. Lina's exotic beauty mesmerizes Michael, and he becomes torn between the woman he loves and the woman he lusts after. But when he finally reveals his feelings to Cathy, she surprises them both by confronting Lina. When the two women discover that they are drawn to each other, the three lovers find themselves forever affected by the most passionate and inspiring summer of their lives. One of the film’s highlights is the haunting and beautiful score by legendary composer Basil Poledouris (Conan the Barbarian).