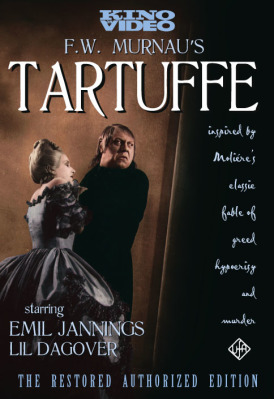 The most gifted visual storyteller of the German silent era, F. W. Murnau crafted works of great subtlety and emotional complexity through his absolute command of the cinematic medium. Known for such dazzling films as Nosferatu (1922), The Last Laugh (1924), Faust (1926), and Sunrise (1927), Murnau was also drawn to more intimate dramas exploring the dark corners of the human mind.

In Tartuffe, he revisits Moliére's fable of religious hypocrisy, in which a faithful wife (Lil Dagover) tries to convince her husband (Werner Krauss) that their morally superior guest, Tartuffe (Emil Jannings), is in fact a lecherous hypocrite with a taste for the grape. To endow the story with contemporary relevance, Murnau frames Moliére's tale with a modern-day plot concerning a housekeeper's stealthy efforts to poison her elderly master and take control of his estate.

Kino on Video presents the 1925 American release version with its original titles and tinting, from a 35mm nitrate print preserved by the Library of Congress and restored in 2002 by the Bundesarchiv-Filmarchiv Berlin/Koblenz and the Friedrich Wilhelm Murnau Stiftung of Wiesbaden.
Product Extras :