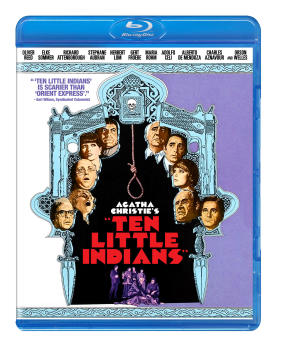 One of the most diabolical mysteries ever concocted comes to vivid life in this all-star version of the classic Agatha Christie thriller! Summoned to an isolated, elegant hotel in the middle of the desert, several strangers find themselves accused at dinner of heinous crimes that have escaped punishment... until now. Now they're being murdered off one by one in a pattern from a chilling nursery rhyme, and suspicion grows as they realize the killer may be one of their own. Oliver Reed (Burnt Offerings, The Hunting Party) and Elke Sommer (A Shot in the Dark, House of Exorcism) headline a dazzling cast of potential victims including Oscar winner Sir Richard Attenborough (Gandhi, Jurassic Park), Herbert Lom (The Dead Zone, the Pink Panther series), French pop sensation Charles Aznavour, Stephane Audran (Le Boucher, The Big Red One), Gert Frobe (Goldfinger, Bloodline), Adolfo Celi (Thunderball, Danger: Diabolik), Alberto De Mendoza (Horror Express, The People Who Own the Dark), Maria Rohm (Venus in Furs, 99 Women), and the voice of one and only Orson Welles. Directed by cult filmmaker Peter Collinson (The Italian Job, Open Season), this riveting and stylish whodunit is more baffling than ever in glorious HD!