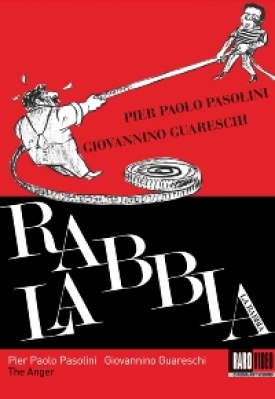 LA RABBIA attempts to show how the right wing and the left wing viewed the societal changes in the 1950s and 60s. Pier Paolo Pasolini and Giovannino Guareschi explore topics such as racism, the Middle East, Cuba, Stalinism, the Atomic bomb, and the death of Marilyn Monroe from diametrically opposite sides of the political spectrum, so it is no wonder why the U.S. government was afraid of this film.

Pasolini and Guareschi, two of the most important opinion makers and intellectuals in post-WWII Europe, employ documentary footage from this era and an accompanying commentary, in which they attempt to answer, Pasolini quite elegantly and poetically and Guareschi quite negatively and outrageously, the existential question: why are our lives characterized by discontent, anguish, and fear? The film is in two completely separate parts, and the directors of these respective sections, left-wing film director and poet, Pier Paolo Pasolini, and the conservative journalist and film director, Giovanni Guareschi, offer the viewer two extremely polar views of, and prescriptions for modern society. This publication is an exclusive, uncut, restored version obtained from the Cinemateque of Bologna.

RaROvideo's DVD of La rabbia is a beautiful restoration of what was considered a lost film just a few years ago. - DVDTalk