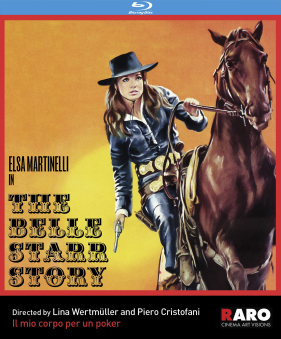 The Belle Starr Story is a rip-roaring Spaghetti Western starring Elsa Martinelli (Hatari!) and directed by the legendary Lina Wertmüller (Seven Beauties, Swept Away). It is the only Spaghetti Western to be directed by a woman - she replaced Piero Cristofani (using the pseudonym “Nathan Wich”) a few days into the shoot. Abused and dominated by men in her youth, Belle Starr (Martinelli) now out-rides, out-smokes, out-shoots, and out-gambles them as she makes her way around the Old West, usually wearing male garb.