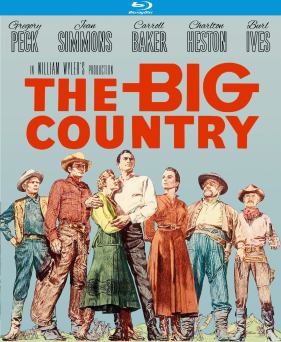 Newly Mastered in HD! From William Wyler, the legendary director of Mrs. Miniver, The Best Years of Our Lives and Ben-Hur, comes this epic western featuring an incredible cast of screen legends Gregory Peck (On the Beach), Jean Simmons (Elmer Gantry), Charlton Heston (The Ten Commandments), Carroll Baker (Baby Doll) and Burl Ives (Cat on a Hot Tin Roof) in his Oscar-winning performance (Best Actor in a Supporting Role). This bold, sweeping tale of a ship's captain (Peck) who ventures west to find a hotbed of jealousy, hatred and dangerous rivalries. As the reluctant hero is thrust into the maelstrom, he must summon all of his resolve to save not only his own life, but also the life of the woman he loves. The Big Country is an action-packed adventure that triumphs as a work of art. The film’s legendary rousing score by Jerome Moross (The War Lord) was nominated for an Oscar. The stellar cast includes Charles Bickford (Duel in the Sun) and Chuck Connors (TV’s The Rifleman and Branded).

Fun in the Country - Featurette

"Kino Lorber's majestic Blu-ray presentation of The Big Country is nearly an essential presentation of William Wyler's masterpiece, on a disc loaded with enough extras to satisfy casual and rabid collectors alike."

"A great release from Kino, that should be in every serious collection. ...Very Highly Recommended."