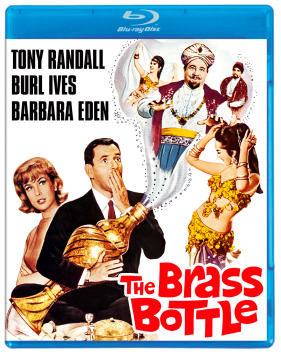 Tony Randall (The Odd Couple), Burl Ives (The Big Country) and Barbara Eden (Harper Valley P.T.A.) conjure up laughs and magic in The Brass Bottle—an enchanting comedy classic that inspired the hit TV series that made Eden an icon, I Dream of Jeannie. When architect Harold Ventimore (Randall) buys an antique Arabian bottle at auction, he ends up freeing the centuries-imprisoned genie, Fakrash (Ives). Forever indebted and ready to serve his new master, Fakrash grants Harold his every wish. But things quickly go from bad to worse when his beautiful fiancée (Eden) discovers a herd of camels living in his garage, belly dancers in his house, and a pack of elephants marching through the streets! Now the whole town thinks that he’s gone off the deep end, and Harold has got to make everything right and convince his fiancée that he’s not crazy. Wonderfully directed by Harry Keller (The Female Animal), this tale of a madcap genie and his zany antics will grant your wish for comedy!