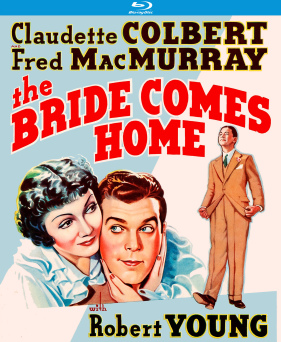 Screen icons Claudette Colbert (The Gilded Lily, It Happened One Night) and Fred MacMurray (Hands Across the Table, Double Indemnity) co-star in this classic screwball comedy set against the backdrop of Chicago during the Depression. At the center of a romantic triangle is Jeannette Desmereau (Colbert), a socialite left penniless by the stock market crash who takes a job as a writer for a men’s magazine. Her two on-again, off-again suitors just happen to be her hard-boiled editor Cyrus Anderson (MacMurray) and the company’s wealthy owner, Jack Bristow (Robert Young, Crossfire). Tempers flare, opposites attract and true love wins out at the end in this fast-paced delight directed by Wesley Ruggles (No Man of Her Own) and featuring memorable comic turns by supporting players Edgar Kennedy (Duck Soup), Donald Meek (You Can’t Take It with You) and William Collier Sr. (All of Me).

For press and publicity inquiries, please email [email protected]com. A selection of press materials for this title may be available for download here.