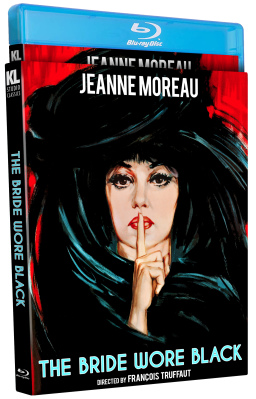 Brilliant and daring, writer/director François Truffaut (The 400 Blows, Mississippi Mermaid) marries passion with vengeance for one of the most haunting love stories ever filmed. The incandescent Jeanne Moreau (Jules and Jim) is Julie, who has just wed her childhood sweetheart. But just moments after the ceremony, her beloved is murdered on the steps of the church. Emotionally distraught, Julie becomes obsessed with her bridegroom’s death and begins a descent into madness as she relentlessly pursues the men responsible. Adapted from Cornell Woolrich (Rear Window) and scored by Bernard Herrmann (Psycho), The Bride Wore Black unveils itself as a Hitchcockian thriller and gradually evolves into the fascinating portrait of a woman ravaged by grief. Featuring sumptuous cinematography by Raoul Coutard (Shoot the Piano Player) and pitch-black performances by Michel Bouquet, Jean-Claude Brialy, Charles Denner, Claude Rich, Daniel Boulanger, Michael Lonsdale and Alexandra Stewart.

In French with Optional English Subtitles