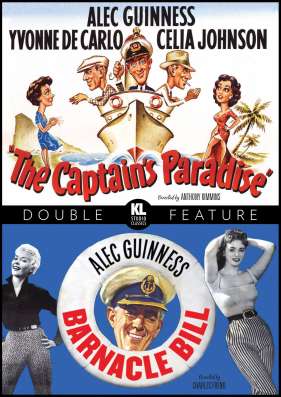 2 Brand New 4K Restorations! The Captain’s Paradise - Henry St. James (Alec Guinness, The Lavender Hill Mob), captain of a ferry steamer ploughing between Gibraltar and Kalik in North Africa, believes he has discovered the secret of an earthly paradise, a paradise founded on the love of two very different women. In Gibraltar he has a placid, home-loving wife (Celia Johnson, Brief Encounter) who caters for all the domestic tendencies in his character. In Kalik his wild, romantic desires find fulfillment in the exotic charms of Nita (Yvonne De Carlo, Buccaneer’s Girl). But he has overlooked the possibility that women can also be creatures of mood and contrast and that a heaven on earth can become a fool’s paradise. ••••• Barnacle Bill - From the dawn of man to the Battle of Jutland, the Ambrose family tree has always maintained its ability to create a long line of distinguished naval officers… until now. Captain William Horatio Ambrose (Alec Guinness, The Man in the White Suit) has tried hard to preserve his family’s tradition, but unfortunately suffers from chronic seasickness; just the mere mention of anything slightly nautical or aquatic sends him overboard. Once again, screen great Alec Guinness manages to create another unforgettable comic creation for the last film he made with the legendary Ealing Studios. Released in America as All at Sea, this classic comedy co-stars Donald Pleasence (The Black Windmill), Percy Herbert (Tobruk), Lionel Jeffries (Sudden Terror), George Rose (A New Leaf) and bestselling novelist Jackie Collins.